Fahrenheit 451 is one of those books I'd always meant to read one day, but it never quite bubbled to the top of my list until I saw that the Cardiff Book Collective was reading it. Running my own book club, I've always been a bit curious about what the other local book clubs might be like, so I figured this would be a useful excuse to check out the competition.

It was good fun, and if your booky tastes are a little more literary / less genre-bound than mine, it's a book club I'd recommend for people in Cardiff. Top tip: if you want to make a good impression on bibliophiles, I can now heartily recommend not declaring that an antagonistic fire chief who burns people's books, libraries and occasional bibiophiles is the true hero of a dystopian novel. Sharply indrawn breaths all around the table... ;-) 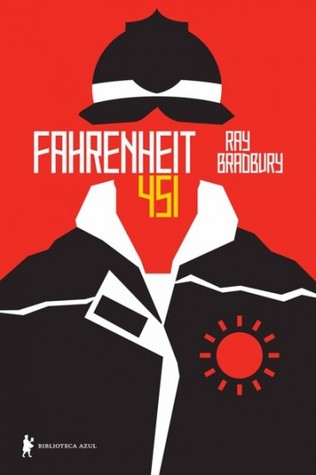 Fahrenheit 451 is a classic, superfamous dystopian novel. It's not quite up there with 1984 and Brave New World, but leading the charge of the second tier of the genre, alongside The Handmaid's Tale. Everyone knows that the title is derived from the temperature at which paper burns, and most people probably know that the book is a bout a firefighter in a world where firefighters don't extinguish fires, but burn books instead.

Our hero, Guy Montag, is a firefighter dancing on the edge of mania. From his rictus grin at the start of the novel (as he throws flames with his kerosene hose) to the paranoid feeling that someone has been watching him on his way home from work, he is clearly just a little off balance. It's when he meets a stranger - 17-year-old Clarissa, that his life really begins to change.

Clarissa opens his eyes to the world. She does this by asking questions (to which he has no answers) and teaching him to pay attention to... well, things, people and the world. And then she and her entire family disappear.

Montag begins to crumble. He's been stealing and hiding books in his house. His marriage is hollow and empty. The girl who fascinated him is gone. And then an old lady decides to die a firey death with her books rather than allowing herself to be taken away and thrown in a mental facility. Meanwhile, the cyborg hound (eight-legged, dog-brained, mechanical) in the fire station responds to Montag as if he were a threat, and his colleagues and chief notice his increasingly odd behaviour...

As a dystopia, Fahrenheit mixes the uncannily prescient (re: the media, the anti-intellectualism, the dumbing down of people) with the future-blind (gender equality / women's lib was seemingly unimaginable to the author, while nuclear wars seemed inevitable). It's absolutely worth reading, for the ideas behind it more than anything else.

For me, the entire novel exists in order to justify one character's monologue. SPOILERS AHEAD!


Beatty, the fire chief, is just the most magnificent thing about the book. He's the main antagonist (the book club used the word 'baddie' much to my chagrin), but he's smart, educated, and charismatic. He's scary as hell, but he's also much more sound of mind than Guy Montag. And, in a magnificent lengthy monologue, he tells us how the world changed into the one in the book...

The fact is we didn’t get along well until photography came into its own. Then – motion pictures in the early twentieth century. Radio. Television. Things began to have mass...

And because they had mass, they became simpler . . . Once, books appealed to a few people, here, there, everywhere. They could afford to be different. The world was roomy. But then the world got full of eyes and elbows and mouths. Double, triple, quadruple population. Films and radios, magazines, books levelled down to a sort of paste pudding norm . . .

Picture it. Nineteenth-century man with his horses, dogs, carts, slow motion. Then, in the twentieth century, speed up your camera. Books cut shorter. Condensations, Digests. Tabloids. Everything boils down to the gag, the snap ending . . .

Classics cut to fit fifteen-minute radio shows, then cut again to fill a two-minute book column, winding up at last as a ten- or twelve-line dictionary resume. I exaggerate, of course. The dictionaries were for reference. But many were those whose sole knowledge of Hamlet . . . was a one-page digest in a book that claimed: ‘now at least you can read all the classics; keep up with your neighbours.’ Do you see? Out of the nursery into the college and back to the nursery; there’s your intellectual pattern for the past five centuries or more . . .

Politics? One column, two sentences, a headline! Then, in mid-air, all vanishes! Whirl man’s mind around about so fast under the pumping hands of publishers, exploiters, broadcasters, that the centrifuge flings off all unnecessary, time-wasting thought!


Is it just me, or did Ray Bradbury basically predict Twitter in 1948?!?

Now let’s take up the minorities in our civilization, shall we? Bigger the population, the more minorities. Don’t step on the toes of the dog-lovers, the cat-lovers, doctors, lawyers, merchants, chiefs, Mormons, Baptists, Unitarians, second-generation Chinese, Swedes, Italians, Germans, Texans, Brooklynites, Irishmen, people from Oregon or Mexico. The people in this book, this play, this TV serial are not meant to represent any actual painters, cartographers, mechanics anywhere.

The bigger your market, Montag, the less you handle controversy, remember that! All the minor minor minorities with their navels to be kept clean. Authors, full of evil thoughts, lock up your typewriters. They did. Magazines became a nice blend of vanilla tapioca. Books, so the damned snobbish critics said, were dishwater. No wonder books stopped selling, the critics said. But the public, knowing what it wanted, spinning happily, let the comic-books survive. And the three-dimensional sex-magazines, of course . . .

It didn’t come from the Government down. There was no dictum, no declaration, no censorship, to start with, no! Technology, mass exploitation, and minority pressure carried the trick, thank God. Today, thanks to them, you can stay happy all the time (...) With school turning out more runners, jumpers, racers, tinkerers, grabbers, snatchers, fliers, and swimmers instead of examiners, critics, knowers, and imaginative creators, the word `intellectual,’ of course, became the swear word it deserved to be.


This bit sends a chill down my spine. Ignore, for a moment, the word 'minorities'. Instead, think of all the complaints, all the outrage, all the fingerpointing that happens. Whether it's accusations of racism, or accusations of "libtardism" or communism, how much of our public discourse is taken up by complaints and accusations that someone said something someone else didn't like to hear?

And "the word 'intellectual', of course, became the swear word it deserved to be." - paraphrase it, and you arrive at "people have had enough of experts". Ray Bradbury didn't just predict Twitter. He predicted 2016.


We must all be alike. Not everyone born free and equal, as the Constitution says, but everyone made equal. Each man the image of every other; then all are happy, for there are no mountains to make them cower, to judge themselves against.

And this culmination reminds me all-too-painfully of the current (and past) government in the UK. In the name of preventing terrorism, the UK has introduced policies that discourage anything but conformism. Whether it's the Prevent Strategy, or Theresa May's insistence that 65 million people stand behind her with regards to Brexit, or the way people who question Brexit are now regularly described as traitors, conformism has become an almost religious obligation on British citizens, as far as the Conservative government is concerned.


Don’t give them any slippery stuff like philosophy or sociology to tie things up with. That way lies melancholy. Any man who can take a TV wall apart and put it back together again, and most men can nowadays, is happier than any man who tries to slide-rule, measure, and equate the universe, which just won’t be measured or equated without making man feel bestial and lonely. I know, I’ve tried it; to hell with it. So bring on your clubs and parties, your acrobats and magicians, your dare-devils, jet cars, motor-cycle helicopters, your sex and heroin, more of everything to do with automatic reflex. If the drama is bad, if the film says nothing, if the play is hollow, sting me with the theremin, loudly. I’ll think I’m responding to the play, when it’s only a tactile reaction to vibration. But I don’t care. I just like solid entertainment.

Oh look, he predicted Britain's Got Talent, and reality TV too...

In fact, the way Bradbury imagines TV is uncanny in some aspects. It's immersive (instead of VR headsets, he envisioned all walls of a room becoming screens). It's not made up of plots, but people who talk more or less nonsense, but require an interaction from the person watching. Most of all, they just project emotions, and ask for agreement, to which Mildred (Montag's wife) responds. This purely emotive stuff, it reminds me all-too-uncomfortably of the way we use cat videos and 'inspirational' Youtube clips these days: quick shots of comfort and emotion to help us cope with a world we feel unable to affect. The hollowness of Mildred is perhaps the most terrible thing of the book, because Mildred has become so addicted to her virtual world, so removed from thought and critical analysis, that she barely seems human at all. And at my most cynical, I wonder, are there people like Mildred around today, are we becoming Mildreds, is Mildred the cornerstone of the decline of Western civilization?

One prediction Bradbury got wrong is that the media / powers that be would stop providing conflicting information about things, first just providing one version of anything, and ultimately, providing none at all. Instead, we now find ourselves in a time when the most potent and effective tool to keep society disengaged is information overload, with too many (often spurious and dishonest) narratives being put about. The key to disengagement is not reducing information, but creating so many plausible lies that people no longer have the energy (or capability) to filter out truth from fiction. Instead, some people just listen to what they want to hear, while others don't listen to anything at all...

(As Kindle Reader doesn't allow copy and paste, I copied most of the quotes from this blog: https://runninginmyhead.com/2014/07/20/things-remembered-beattys-speech/)

As far as I'm concerned, it's Beatty's speech that makes and justifies the existence of Fahrenheit 451. I didn't like Montag, I didn't like any characters, but Beatty, educated, smart, literature-quoting Beatty, is magnificent. Other readers found him fascinating, but still think him evil. I don't know: my own sense was that Beatty was testing Montag, that Beatty had tested all his firefighters, and not in order to catch them out, but in order to get a reply. I'd swear he was longing, hungrily, for someone to spar with, for someone to debate him, for someone to have read things and fight back intellectually. He kept emphasising his disdain for books and intellectuals and people's differences so emphatically, I thought he protested too much. In a society where books are banned, he revealed enough to Montag to incriminate himself many times over. Perhaps it's just how I want to read him, but I was half expecting Beatty to be happy to join in a revolution, if only someone fought and beat him with arguments.

Instead, of course, Beatty goads Montag until Montag snaps and burns him alive. (Montag later convinces himself that Beatty committed suicide-by-fireman, which may be true: in this world, it seems like most people are secretly and subconsciously suicidal.)