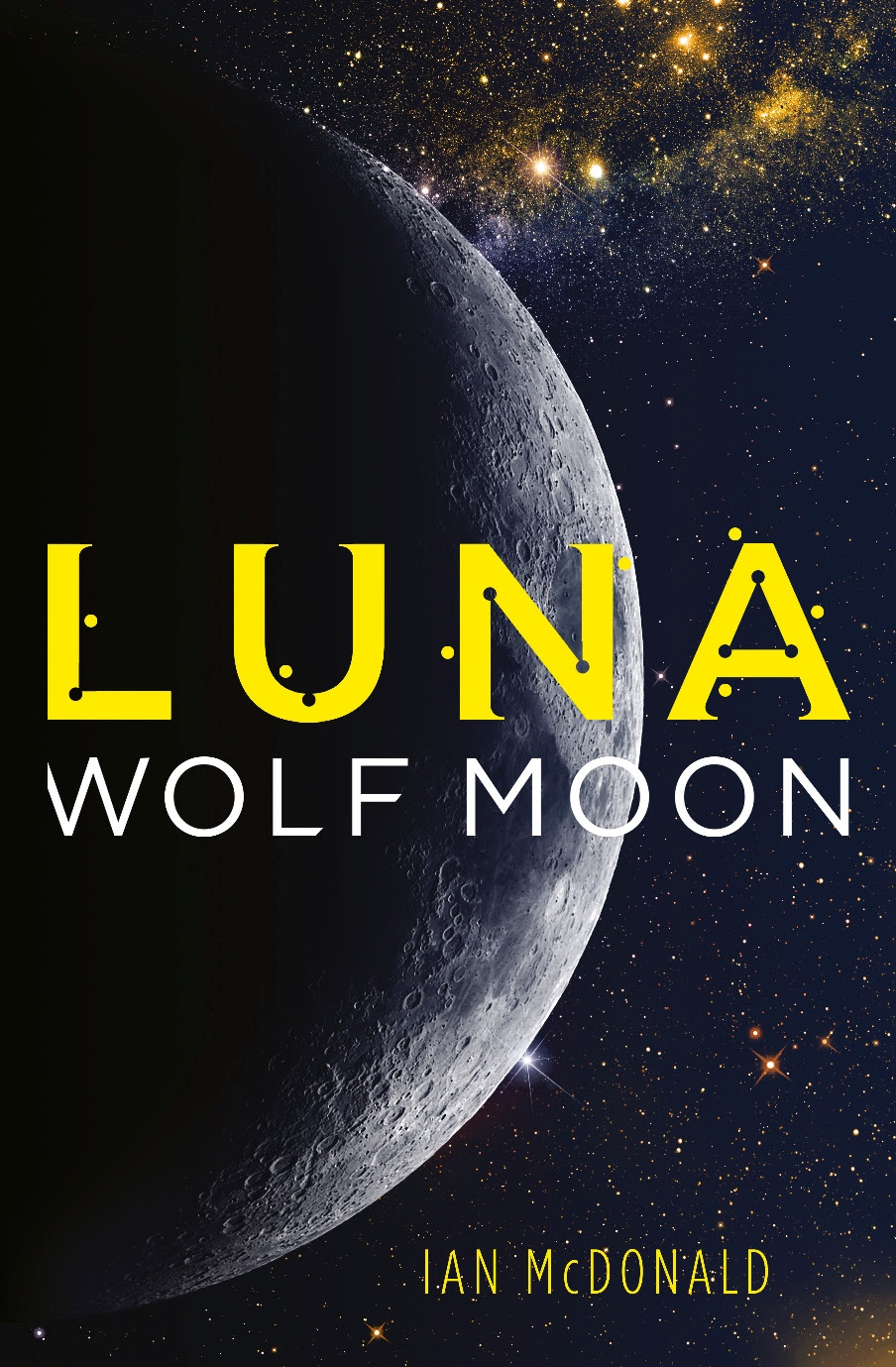 Luna: Wolf Moon is the second book of Ian McDonald's Luna series.I thought the first book was originally described as the start of a duology, but Wolf Moon does leave enough plot threads open to suggest that this is now intended as a long, epic series.

To recap: the moon has been colonised. It's a Wild West of sorts, a dog-eat-dog, cut-throat outpost, run by the Lunar Development Corporation and four/five family business dynasties, each of whom has effective monopolies on specific lunar industries. Transport is run by the Vorontsovs, rare earth mining is run by the Mackenzies, Food production is in the hands of the Asamoahs, energy production is in the hands of the Suns, and Helium3 harvesting was run by the Corta family. Except, the Corta family have fallen. Their empire has been destroyed and scavenged by the Mackenzies. Remaining Cortas are rare and isolated from each other. Some shelter under the protection of factions with some power, some are effectively hostages, and one is plotting his revenge...

The Luna series combines Ian McDonald's strengths with a new direction. As usual, he creates a convincing, credible future, populated with people from non-Western cultures. Luna, however, is a world much more similar to Game of Thrones than to other recent Ian McDonald novels. Dynastic families jostling for power, happy to spill blood and without any fear of repercussions? Outright battles and small wars? Betrayals, conspiracies, greed? It's hard to read Luna novels without thinking of GRRM's magnum opus. Ian McDonald differs from many GRRM derivative writers in that he is himself a stellar talent, producing an epic that is easily on a par with Song of Ice and Fire. Also, the family rivalries in Luna aren't focused on getting an iron throne / power over everything. Rather, they compete and battle for wealth, territory, income, and the occasional longstanding feud. Still, there are enough similarities for his books to have been picked up by TV companies, soon to be a major TV show...

I first heard of Luna at a convention, where Ian McDonald talked about the books, and the fundamental premise: that the moon has no law but contract law. The basis of the society he predicts is therefore not "feudal dark ages", but "hyper-capitalist, libertarian utopia". There is no government on the moon, only a corporation with a local figurehead who doesn't actually wield all that much executive power. There is a court, but it's a court of arbitration above all, since there isn't a criminal law system. Rich family dynasties have their private security forces, but there is no standing army or police force. What Luna illustrates, if you read it with all that in mind, is that there is actually no systemic difference between libertarian utopia and The Dark Ages. The only difference is the absence of the Black Death / disease and the presence of higher levels of technology. Everything else is pretty much the same: borderline slavery, warlords, feudal society etc. However, this aspect of the premise is quite subtly interwoven into the plot. It's not staring you in the face, and I think it's almost too hidden in the background of the Lunar world. Had I not heard the talk, I would probably have missed it entirely.

With a huge cast of characters, Luna: Wolf Moon was a bit bewildering at times, because I had forgotten much of the detail of Luna: New Moon. The things and characters I did remember (Adriana Corta, Marina) were much less central in Wolf Moon than the characters I had forgotten. Marina, for example, is absent for the first quarter of the book, and her story had been my favourite in the first novel because she wasn't born rich with a silver spoon in her mouth, unlike every other character. This is perhaps Luna's biggest flaw, that almost everyone is rich and powerful. Sure, there are falls from power and rises, but it's a stark contrast to Ian McDonald's other novels, where most characters are hustling a little corner for themselves from positions near the bottom of the power structures. Luna, instead, focuses on the very top. The hoi polloi are pawns and footsoldiers.

Unsurprisingly, Wolf Moon is well written, with good prose, compelling settings, authentic and believable science. However, it doesn't quite rise over the shadows cast by Song of Ice and Fire's influence. And, filled with characters too highborn to be easy to empathise with, the novel lacks some of the heart and soul and drive that Ian McDonald is capable of. It's a good book, well worth reading if you've read Luna: New Moon, but it's not the first book or series I would recommend to a reader new to Ian McDonald.