The other day I was in the mood for something fast, easy to digest, and filled with aeroplanes. So I bought a couple of aviation thrillers. For those unfamiliar with this sub-sub-sub-genre, there are technological thrillers written for an audience of aviation enthusiasts (such as myself). Not entirely surprisingly, the number of novels in this field is a bit limited. 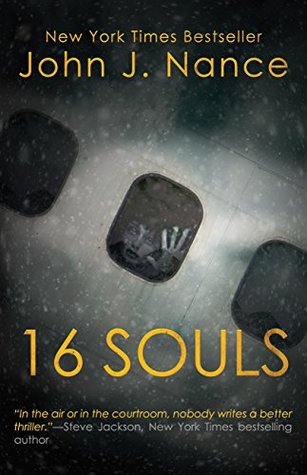 So, first, 16 Souls by John J. Nance, who is pretty much the big name author in this genre. Sure, Michael Crighton had a crack at this sort of book with Airframe, but John J. Nance has endeared himself to planespotters far and wide by being a former pilot and by writing pretty much exclusively about planes and pilots in peril.

As such, 16 Souls is a pretty slick, accomplished thriller. I read virtually all of it in one night, because I wanted to get to the next bit. It's the story of a pilot, Captain Marty Mitchell (alliterative names for the win!) who is about to go on trial for murder in the second degree as result of a deadly accident he was involved in. The novel alternates between scenes set in the trial's timeline, and flashbacks to the incident as it unfolded.

In all honesty, it's the incident itself which is exciting and interesting to read about. Fortunately, Nance has returned to premises that are closer to realism and further away from OTT scifi.
(Side note: The book that propelled Nance to bestseller status was Pandora's Clock, an excellent scifi aviation thriller about a deadly virus on board a 747. The drama and action is amped up to 11 in that one with a missile-armed business jet, explosions, and Outbreak-style mayhem. Then, in Medusa's Child, a book about a nuclear bomb aboard a 737 during a hurricane, it gets amped up to 12, and some of his other novels bounce up and down on the suspension of disbelief until it snaps. I kinda gave up on him after reading Blackout, which toyed around with every aviation enthusiast's wet dream - incapacitated pilots mean a kid with flight-sim experience is called upon to try to fly and land a jumbo jet - and then ruins it with a completely unbelievable crash scenario that is physically impossible.)

Where was I? Ah yes, the premise. 16 Souls imagines a mid-air collision wherein a small aircraft isn't completely shattered, but gets somehow embedded in the bigger airliner that plowed into it. It may be incredibly unlikely, but it's not outside the realm of the imaginable. And from that scenario, Nance derives a plot of suspense as he keeps the reader guessing about what the pilot will do, and how this will result in disaster.

Much as the story of the accident is exciting, the story of the pilot's legal woes is not. First, we see him attempting suicide, largely as act of revenge against the system for daring to prosecute him. Then, we follow his (female, rookie) lawyer's attempts to keep him straight and prep for the case. It's a bit like the movie Sully, which withheld the full details of the accident from the audience until a key scene during Sully's NTSB hearings, but in this book, the legal thriller just gets in the way of the interesting stuff. And Marty Mitchell is a really annoying character once he's outside the cockpit. Sure, he's meant to be traumatised, but he comes across as whiny and entitled, because he rails an awful lot against lawyers for daring to suspect and accuse him of a crime. He seems to think that a pilot in command of a plane is above earthly law.

The other thing which was mildly annoying is that John J Nance appears to have turned into a slightly sexist dinosaur. Maybe his thrillers were always such - it's been many years since I read most of them - but I remember that he seemed ahead of the curve at one time. For example, in Pandora's Clock, a male rookie works with a more seasoned female agent (they reversed the sexes for the TV adaptation, which was quite telling). In 16 Souls, on the other hand, a heavily traumatised crash victim later describes the pilot to an investigator: "Just to look at him inspired confidence. Like he came out of some Hollywood casting company, you know? Square shoulders, tall and trim, chiseled facial features. Salt and pepper hair, very neatly cropped. That deep, rumbling, authoritative pilot voice. I figured he was in his mid-fifties and probably former military. He just looked like Air Force or Navy. Maybe it's a female thing, ... but if a guy like that is willing to fly, I'll be his passenger any day."

OK, so Nance is no longer writing planespotter-porn, now he's writing pilot-porn. Fine, let the women characters swoon in the middle of their trauma. Then you get some male characters having a chat where they get paranoid, whine and bemoan these PC times:
"tell me what form of payment should be rendered for past intelligence proviced. Cash, check, liquor, ... women?"
"Women? Shit, Scott, your sense of humour is gonna get us in deep trouble one of these days when the call gets monitored by the NSA or something and someone posts it on Facebook."

...while the woman lawyer ponders how to keep her client in line: "I need to keep him focused and ready for court, and I'm worried about letting him out of my sight. Maybe I should just sleep with him!"
(Yeah, it's an internal joke she's making in her own head, but somehow all the lady-swooning over pilots seems tacky to me.)

16 Souls is, in the end, a decent aviation thriller. It holds the attention. It may not feature deep characters, decent humour, or complicated insights into human nature, but it's easy to digest, readable, and the scenario it presents is tense and exciting. It is bloated by a legal thriller that doesn't, and at times it feels like reading tacky old-pilot fantasies / wishful thinking, but it's worth your while if you like planes. 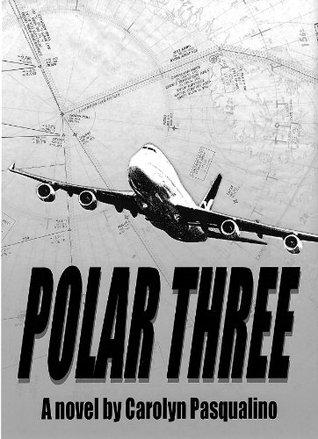 My thirst for Jet A fuel not being entirely slaked by this point, I then read Polar Three by Carolyn Pasqualino. She, too, is a pilot, though not a retired one.

Polar Three is the story of a cargo 747 flying from Chicago to Hong Kong across the Polar Three air route. (There are only a handful of air routes across the pole). Unfortunately for its crew, the temperatures outside are colder than predicted, cold enough to threaten freezing their fuel inside its tanks. Add a solar storm and a communication cut-off, and the plane is in trouble...

Polar Three is a quite different novel from John J Nance's offerings. For one thing, the crisis scenario is much less far-fetched, and not overdramatised at all. Essentially, the troubles the crew is faced with are realistic troubles that real pilots encounter, and their responses are authentic.

Things are a bit less realistic once the flight is over, as many solutions are served on a platter to the characters.

Polar Three differs in other ways from Nance's novels: the characters in this book are professionals, interacting professionally, and staying at professional distance, throughout the story. This means the reader doesn't get a huge amount of gooey emotional stuff or personality to connect with. Instead, we're reading about collegiate colleagues  working on problems as a well functioning, but somewhat bland team. It can feel a little sterile. Pasqualino must have noticed that problem, so she added two dogs to the story, who basically inject some woofy warmth to proceedings. But I'll be honest, the book lacks human interest. (There is a joker among the characters, but his jokes are the sort of safe and predictable office jests that everyone smiles at out of politeness. Small talk with a smiley at the end.)

Polar Three is a fairly dry novel, in that the book gets very technical and accurate. It feels like watching a Just Planes! video from time to time, as radio contact is covered in full and accurately. At another point, a lengthy part of the novel features detailed aircraft maintenance. As aviation enthusiast, I enjoyed much of this, or at least, I did not find it tiresome. I suspect for readers with less fondness for aircraft and flying, the novel is unlikely to be anywhere near as enjoyable.

Dry, technical, authentic: Polar Three is an acquired taste, appealing to a niche audience. That said, I liked reading an aviation thriller that put authenticity first. I did not dislike any of the human drama (because there was very little), and I never rolled my eyes in annoyance. I had hoped for a somewhat grittier story of survival against the odds in Arctic ice, but there was something pleasantly mellow about the book, while it still held my attention.

Fellow aviation enthusiasts may well find this book worthwhile, and it earns a lot of kudos by being consistently credible. Not bestseller material, but a book that wannabe pilots can savour.