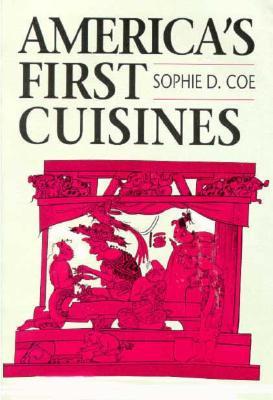 America's First Cuisines is a unique book: it is an accessible account of what the peoples living in the Americas used to eat, before the conquest of the continent by Europeans.

Food history is not a topic I knew much (ahem, anything) about before I read this book. I had started to get an inkling that huge swathes of the foods I'm used to are not actually traditional European fare, after reading books about South American archaeology. Among other things, they mentioned various plants that had been domesticated in the Americas - and which were unknown in Europe and Asia until the 'discovery' of America by Columbus.

So America's First Cuisines was bound to be interesting. The book lays its ground work by discussing what had been domesticated and where, mentioning almost in passing that there may have been many more domesticated crops that are lost now, after the disasters that followed America's discovery (the waves of disease that killed up to 90% of all the continent's inhabitants), and because the Europeans were primarily interested in crops that they could easily map onto European equivalents. So maize was an instant hit ("the American grain!"), but potatoes took much longer to gain traction in Europe, and quinoa was of little interest until recently, when it became a fad.

Much of the early part of the book deals with basic foodstuffs / ingredients, because that is what archaeological and genetic evidence can prove. Once the basics are established, the book fastforwards to the conquest, because it is then that written records start being generated by conquistadors, describing the meals and dishes they are served by the different cultures. So, first the ingredients, cultivated and made available over millennia, and then the snapshot of the early 1500s, and a glimpse of what was being made out of those ingredients.

It's not just an interesting and educational book. For me, it was also full of surprises. There are one or two instances when America's First Cuisines debunks other theories that are still quoted by historians today - generally theories that were originally based on pure conjecture, but which became entrenched simply because no one bothered to investigate or look for evidence. (Much like the theory that Komodo dragons have such a vile mouth flora that it is the bacteria killing their prey once bitten. This was common knowledge until just a few years ago, when someone checked and found that actually, Komodo dragons are venomous, and inject venom into the prey through their teeth, like snakes. Similarly, many historians quote a "three sisters" theory about crops in Central America, which claims that a convenient combination of three plants growing together in a field would provide all the nourishment a people need, and that the "three sisters" were almost worshipped for it. Turns out they were not worshipped, and while they can grow together neatly, there is little evidence that any people relied on that combination to the extent historians now claim, and in fact, the diet produced by such a reliance would be insufficient in protein for pregnant women and possibly for men). Basically, Sophie D Coe has done her homework properly even when others haven't and her book shows it.

America's First Cuisines is a great book. It illuminates an aspect of history and knowledge that most people are probably quite ignorant of. It does so accessibly and reliably. The one thing I would have liked to see included is some recipes, but I understand why there are none: it would have been conjecture, and the book is strictly factual. Still, even without any recipes, this is a book worth reading.