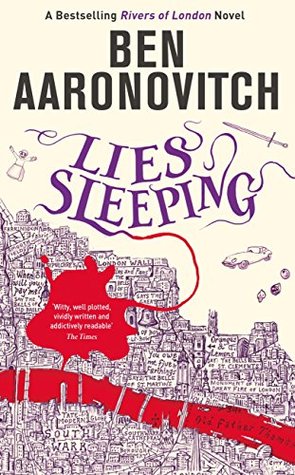 Lies Sleeping is the seventh novel in Ben Aaronovitch's Rivers of London series. Chances are, if you like urban / contemporary fantasy, you will have given this series a try by now. If not: go out and buy Rivers of London right now. It's the first novel, and the beginning of the best urban fantasy series ever written.

Peter Grant is a Detective Inspector by now, having worked his way up from rookie (and apprentice wizard) to trusted professional (and ok wizard, though it seems his magical abilities have plateaued and aren't growing much between volumes). At this point in the series, the support cast includes dozens of people, including lots of policeman officers, extended families of Peter and the Rivers, several scientists / medics, and even a few others who are learning wizarding through officially sanctioned channels. So even though I've read every book, I struggled a bit to keep track of who's who. I may have to re-read the series in one go at some point.

One of the reasons the cast is so enormous is that this is the book of a major police operation, nicknamed "Operation Jennifer", with the aim of sorting out the Faceless Man problem once and for all. Meanwhile, Martin Chorley, the Faceless Man (an evil wizard) is busy, busy, busy, scheming to achieve some big objective that might change the world (or London) forevermore...

So far, the series has largely been alternating between "Faceless Man" novels (the even numbered ones) and "archetypal myth" novels (the odd numbered ones). I have consistently enjoyed the ones featuring some archetypal, atmospheric, folkloric style myths more. The Faceless Man could have been interesting, I guess, but after a big intro, his mystique fizzled out quickly. Now he's just plain Martin Chorley, bereft of charisma or mystique, and not really the creepy supervillain that he started out as. More powerful than Peter, but easily matched by Nightingale. So an odd-numbered novel about him felt a bit like it's cheating me out of one of the good ones. (They're all good, but the ones with little or no Faceless Man are simply better).

So, big police operation, Faceless Man, cast list of dozens... Lies Sleeping is not the most accessible novel. Anyone unfamiliar with the series won't find much to enjoy, and those familiar with it need a really good memory. On the bright side, Lesley is in this a lot, and her former place has been taken by Guleed, so Peter has a kick-ass female sidekick again, this time with a hijab, but otherwise very old-Lesley-like. Even better, we meet someone similar to Molly, and the sub plot around her is the best thing about the book (aside from a cameo by talking foxes). Despite those highlights, the book has the usual faceless-man-novel problem of being complicated, messy, and feeling a bit by-the-numbers, so it's not one of the highlights of the series. But this is the sort of series where even the weak entries are not bad.

Bring on the next one!