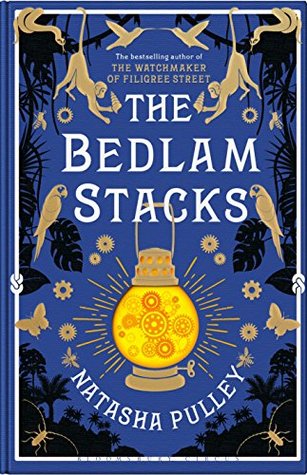 The Bedlam Stacks is a historical fantasy novel set in Victorian Britain and Peru. The narrator, Merrick Tremayne, starts the story as a crippled man, physically and mentally, living in a dilapidated former mansion with his vicious, even more crippled brother Charles.

Charles was crippled by polio: he may be snobbish, bitter and mean, but he rules the home with confidence and an iron hand. Merrick, on the other hand, was badly injured during a skirmish in China. A tall, strong man before the injury, this experience has left him a shadow of his former self, wandering around in a dream-like fugue and letting himself be bullied by Charles.

When Charles tries to ship him off to a parsonage and threatens him with sending him to an asylum, Merrick despairs. Fortunately, an old friend, Clem, pops by to drag Merrick away to go exploring and adventuring. Their mission is to smuggle some cuttings for cinchona trees out of Peru, as those trees are the world's only source of quinine, which is the only medication with any effect on malaria. Merrick's erstwhile bosses at the East India Company (recently nationalised and turned into The India Office) are desperate to break Peru's monopoly so they can get quinine cheaper by growing cinchona trees themselves. For the same reason, Peru is very keen not to let any cinchona trees, seeds or cuttings leave the country: Peru relies on this income. Merrick, it turns out, was a highly accomplished smuggler of plants prior to his injury.

Once Merrick and Clem reach Peru, the expedition soon finds itself in the hands of a native guide, Rafael, who is forced onto them by an overly polite, but unsettling and sinister landowner. The landowner calls everyone 'dear' and 'darling' while ruthlessly bullying Rafael and carefully threatening the others - I felt reminded of Leonardo di Caprio's character in Django Unchained.

As they trek through jungle and mountains, Clem and Rafael don't get along. Merrick, however, is fascinated by their unreadable companion. Then, the landscape starts to get strange...

The Bedlam Stacks does not read like a fantasy novel. It moves at the sedate pace of a historical novel and it is full of historical entities and characters. (Clem is the explorer and anthropologist Sir Clements Markham, one of whose books, a translation of Apu Ollantay, I reviewed a while ago).  Elements of the fantastic are introduced fairly gradually and deadpan, so the reader encounters most of them with the expedition, in a mysterious faraway place (darkest Peru). It might take some readers a while to figure out that they are reading fantasy, not history. Personally, I found it a bit weird and old-fashioned, this gradual revelation of the fantastic in our world. It felt like the author was somewhat interested in the real world and real history, but got bored and had to resort to adding more and more magical elements to create wonder.

Perhaps I would not have spent so much time taken aback by the interweaving of fantastical and historical if I'd liked the characters better. Merrick is not a very nice guy, when he regains his faculties. He's okay on his own, but bizarrely meek around Clem, and his past is hardly that of a decent man. Clem is a toff and a plank and a tosser in this novel. (I wonder if the real Clements Markham was anything like the obnoxious idiot in the book. I hope not.) The most interesting character is Rafael, but he doesn't feel real. He's a Catholic priest, but also somehow connected with native beliefs. At Martel's place, people respond to him as if he's terribly dangerous, but there is no reason why he should be seen that way. He occasionally makes bitter, hate-filled remarks about Indians that, from a white character, would be racist, but he is Indian himself, so it's ok. He's mysterious, unpredictable and interesting and, in the end, unconvincing.

The story progresses at a stop-and-go pace that is quite odd. Long periods of people stuck in one place happen, followed by some chapters where movement and tension occur. Then, as the tension goes up, the novel puts in some very long flashbacks to slow things down again.

The Bedlam Stacks is an unevenly paced, confused novel, with characters who are intriguing but not quite likeable, and an unreality to the people that is tougher to swallow than the interwoven fantasy elements. It's not a bad novel, but it doesn't live up to the potential of its setting and ideas.