Review: The Elephant and Macaw Banner by Christopher Kastensmidt 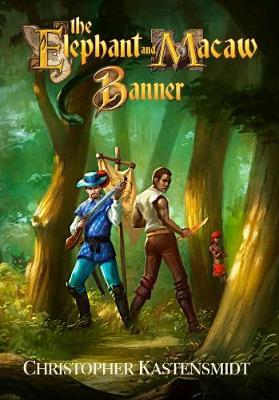 The Elephant and Macaw Banner is a historical fantasy adventure novel, set in 16th century Brasil. There, Dutch adventurer Gerard van Oost and Oludara, a former Yoruban warrior and former slave, have a series of adventures fighting monsters and entangling with local folkloric characters and gods. They join a native tribe of cannibals, they work for colonial governments, and take part in the odd skirmish or two.

It's fairly obvious that the book did not start out as one novel, but is a collection of a series of novelettes and novellas (with, apparently, some additional material). Each chapter is a self-contained adventure / quest, usually bookended by vignettes featuring a wild animal that encounters the heroes of the story. There is some development over time, but very little in terms of overarching plotlines. Perhaps Gerard's problems with his nemesis Antonio (a competing bannerman) or Oludara's desire to return to Africa to continue his family line offer some through-lines, but they're very secondary to whichever quest the adventurers are currently caught up in. The final chapter ties up the narrative, but is also the least enjoyable part of the book. There are other chapters of dubious enjoyment (I got quite cross at one which was rich in prophecy and "Gerard is chosen" to be the chosen one who must choose who shall rule the future empire of Brasil, yada yada yada), but for the most part, the adventures are entertaining, swashbuckling romps.

The novel is quite similar in tone and structure to Fritz Leiber's Lankhmar, which is also a book about two heroes adventuring together. What sets this novel apart is the setting (colonial era Brasil) and the atmosphere (jungles, monsters, cannibals, sorcerers, and forest spirits), which are a refreshing change from vaguely-Nordic & pseudo-European settings. The book doesn't take itself too seriously, so I was never sure whether any particular creature / element was based on actual mythology and history, or made up by the author.

Our heroes are pleasant enough, if not quite as iconic or charismatic as Fafhrd and the Grey Mouser. Oludara is clearly the brains and the muscles of this outfit, while Gerard is a slightly pompous ass a lot of the time, constantly harping on about his Protestantism and Christianity. In fact, Gerard's main contribution is to free Oludara at the start and make him an equal partner: Gerard supplies their company's autonomy, ability to have agency, and respect in a colonial and racist era, while Oludara supplies everything else. Alas, this is never milked for humorous purposes: the setup might slightly resemble Jeeves and Wooster, but the tone does not. The narration really believes the two are equal partners.

The Elephant and Macaw Banner is a pleasant adventure romp. Not too taxing, with an intriguingly different setting. The episodes are somewhat too self-contained, but they're engaging enough that I was never too tempted to give up on the book entirely. There are a few sequences that let down the book, but on the whole, it's worth a read.