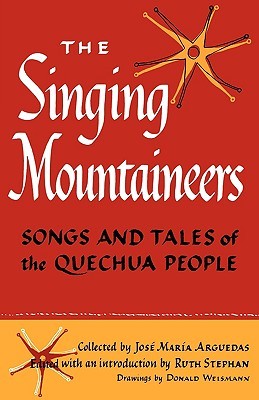 The Singing Mountaineers is a book about the songs and folk tales told by Quechua speakers in South America. Quechua being the language that the Inca empire required all its subjects to learn, this means people living in the Andean region, from Ecuador to Bolivia, but primarily in Peru.

Published in 1957, the book is sadly of its time. Sentences like "Since the Andean people have always been a singing, a poetically disposed, race, the songs have their own proud past." or "Their race is noted for its ancient skill in catching and taming animals instead of killing them, and birds and animals exist as possible friends, as integral living relations in the Indian world." caused me to cringe. There is useful information in the introduction, in between all the patronising, vaguely racist, noble-savage bullshit, but you may find your teeth grating as you read it: mine certainly did.

Fortunately, once the lengthy introduction is over, the songs and tales themselves are more interesting. Unfortunately, about half the length of the book is the introduction, which is a wasted opportunity. The most interesting thing of all, the folk tales, is frustratingly short. Of the 60 or so tales that had been recorded by the author in Spanish, only 17 (if I remember correctly) were included in the English book, much to my chagrin.

The tales were collected in the 20th century. Therefore, they are heavily influenced by Catholicism and the legacy of the conquistadors. Nonetheless, there are glimpses of a different culture, and a few tales seem like they could have been told, with relatively few changes, back in Inca times...

As a resource, The Singing Mountaineers is useful: English translations of Quechua folk tales and songs are not that easy to find. As a book, it's lopsided, with an overly long introduction that is filled with outdated thinking and attitudes, and not enough collected tales and songs. Nonetheless, it's worth reading, for any glimpse of authentic Quechua culture in English is too rare to ignore.