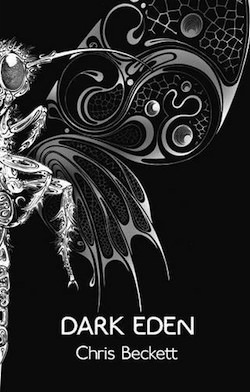 In an valley surrounded by mountains and a sheer drop, on a planet that has no daylight, a few hundred humans live. They are the descendants of two castaways from Earth, brought up to be one Family. They yearn for the day when rescue might come and "return" them to Earth.

John Redlantern is a youth on the cusp of manhood. He does not care for traditions: he yearns for change. And more than anything, he yearns to be the agent of change.

Dark Eden starts with a hunting expedition, during which John separates himself (and his tag-along friend Gerry) from the group. Confronted with a predator, he chooses to fight, rather than hide, and kills the alien "leopard". This turns him into an instant legend - celebrated until he starts disrespecting traditions and openly criticising the elders.

There are several other viewpoint characters (each chapter is told through the eyes of one person), but this is a novel about John and his quest to leave the valley and change human society forever.

The writing is reminiscent of Ian Mcdonald's novels - particularly those set in developing nations. It's the use of repetition to indicate emphasis that creates these echoes, but it's used more heavy-handedly in Dark Eden (on verbs as well as adjectives). The writing voice does not feel quite as self-assured, or just not quite as compelling. I found it a bit awkward: it gives all the characters a child-like sound (to our ears), which is presumably the intention. But these are not child-like people - they are descended from English speaking astronauts. Their speech pattern isn't the result of translation / blending a native language pattern with the English language, but the result of language changing over time. I don't see why they should sound more child-like and primitive than us, and many of the vocabulary choices don't feel right. (Why would their word for the glaciers around them be "snow slugs" - they are unlikely to perceive the movements of the ice and there is no indication there are any slugs on this world. Why would their word for the mountains all around them be "snowy dark" - surely the word "mountain" would have come up in conversation among their ancestors.)

As a novel about teenagers living on a high-concept world full of adversarial adults, another series I felt reminded of was Patrick Ness' Chaos Walking trilogy. That, too, was a gritty but compelling and intelligent tale of youngsters changing the world.

Where Dark Eden differs from both is that I found it harder to digest. In fact, I would go so far as calling it unpleasant. As a society that is a mere handful of generations along from a single couple, sex is very much a tricky subject. Everyone here is the product of not-that-distant incest. (I guess that's one of the reasons for the two common types of deformity - clawfeet and batfaces / cleft lips). Perhaps to compensate, everyone has a very relaxed attitude to sex (they call it slip / slippy) and people have lots of casual sex and not many relationships. Some of those relationships are abusive, and one encounter between our hero and another character might even be a Julian-Assange-style rape (it's not entirely clear).

Our protagonist is not really a good person. He is brave and driven, but very manipulative, calculating, and controlling. He does not care much whether anyone consents to his actions (hence the was-it-or-wasn't-it rape, and several other incidents where he violates people's trust), but he is extremely concerned to make sure everyone has the right sort of impression of him. He may well be a psychopath.

The other characters can be difficult to like, too. There are really only one or two which might be described as unequivocally "good".

Balanced against the unpleasantness is the book's intelligence. It's a very carefully thought through world, with lots of interesting perspectives about the origins of religions ad myths, about matriarchies and patriarchies, about leadership, about human drive, about sexual politics... it's the sort of book that's buzzing with ideas - but it does not sacrifice characterisation to those ideas. (Many ideas-focused books neglect characters: Dark Eden has believable and convincing, complex characters, each with their own motivation. It really does feel like an utterly credible world)

In the end, it's a book I don't feel I can give a rating to. It's hugely intelligent, thoughtful and believable. It's full of believable and complex characters. Admittedly, the prose does feel a little second-hand, but that's personal taste. All of which would warrant a high rating - except, I hated reading it. Like the movies of Zack Snyder or the comics of Frank Miller (and, to a lesser extent, Alan Moore), there is something rotten and seedy and grim about the book. The sexual abuse is the biggest example of that, but even without the rape culture / normalised abuse, the story stains the mind with grime. It's like binge-watching Breaking Bad, minus the (dark) sense of humour. It's almost impossible to give up reading the book once the plot is moving along, but it left me feeling soiled and exhausted. I pretty much hated reading it, but I would not stop.

An impressive intellectual and literary achievement, but not exactly wholesome or joyful entertainment.