Europe In Autumn by Dave Hutchinson 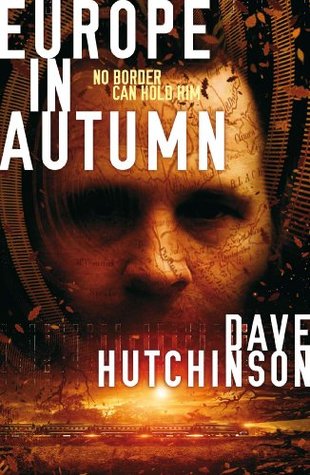 Europe in Autumn is sold as a science fiction thriller. This may not be the best possible description: there's not a whole lot of science fictional themes in the plot (some camouflage suits but little else) and to describe it as a thriller is a bit optimistic.

The book has been highly recommended by other reviewers, so I bought it without having much of an idea of what it was about. The level of enthusiasm and the description as one of the genre literary highlights of the year intrigued me.

Our protagonist is Rudi, a chef living in a near-future Krakow. This is a world where the European Union has collapsed, and where nation states have largely crumbled into dozens or even hundreds of little "polities" - micro-nations. (No wonder it's popular among Brits). This was all preceded by a flu epidemic (which triggered the reintroduction of tight border controls and the abolition of Schengen), but it does not feel like a post-flu-apocalyptic novel. Rather, it feels like a novel imagining what it would be like if the growth of the EU (and UN) are cyclical rather than linear geopolitical developments, ultimately leading to a backswing from the currently-growing supra-national entities to crumbling, splintering and widespread micro-nationalism.

In that world, Rudi is soon hired to become a Coureur. Self-described as a glorified postal service, Coureurs are working for an organisation that smuggles. They smuggle information, objects and even people across the myriad borders of the world, using "tradecraft" (i.e. cloak and dagger techniques and habits that seem to be inspired by spy stories), subterfuge and every possible means except legitimate ones.

The book does have an original and unique vision of a possible future for Europe / geopolitics, but once you get past the setting, you are left with a story about an uncaring protagonist who stumbles through events with no initiative, no curiosity or interest in anything, and not a whole lot of motivation. In fact, the only reason he persists at becoming a coureur is because someone is very discouraging and abusive towards him - and this turns it into a battle of wills, which tickles his stubborn streak.

Once he is a coureur, each chapter of the book describes one episode in his life. Some major things happen between chapters (the book does not dwell on all the big events in-chapter), and Rudi rarely has any idea what exactly he is doing, for whom. In fact, it is a mark of the coureur organisation that no one seems to understand anything - all the people painstakingly manufacturing fake identities and alibis, all the people working on supplying coureurs with fake papers and gadgets, all the people delivering or patching through coded instructions in innocuous everyday conversations - they are all ignorant of their organisation and its leadership, just as Rudi is ignorant about what his cargo is or whom he is working for. Even when he encounters peers and superiors, no one dares to ask or answer querstions, everyone suspects everyone else, and the unsaid remains so unsaid that one wonders if there actually is an unsaid, or whether everyone is involved just happens to be ludicrously paranoid. This is a network of networks in a permanent fog - no one knows who is in charge, no one has any overview, and most of the time, no one knows what they themselves are doing for whom. This lends the book a surreal, Kafkaesque feel (if it ever gets adapted, Terry Gilliam should direct), but combine it with an unbothered protagonist, and you end up with a story that is mindbending without being engaging. (Heroes in these sort of tales usually despair about the insanity of their situation - think Jonathan Pryce in Brazil. If the hero instead shrugs and gets on with being a tiny uncaring cog in a machine he does not understand, there isn't all that much of a story.)

The book does have plenty of action sequences, but it lacks suspense: as it's hard to care about Rudi, and as he doesn't really care about anyone, it's a bit like reading a James Bond movie, only without any charme, without repartee, without sexy stuff / romantic interests and with added Kafkaesque themes and Polish cuisine.

There are some subtle hints in the text that this may not be a future version of our Europe in autumn, but a parallel Europe somewhere else. But even with all the clever world-building and clever premise and clever subversion and clever surreal ignorance going on, it's ultimately too boring.

Clever, it turns out, is not on its own entertaining, and not really the best heart to build a book around.